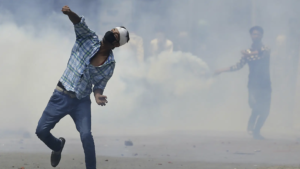 Many see Palestinian & Kashmiri stone pelters as provoking aggression from the occupying armies. Others of us consider them civilian defense guards to draw off aggression against unarmed protesters. As we know from repeated military assaults on worshippers at Al Aqsa Mosque in East Jerusalem, including yesterday, Palestinian & Kashmiri protesters could march with their hands in the prayer position singing religious songs at the top of their lungs & the occupying armies would still violently attack them. As so many Kashmiris have pointed out, no distinction is made by Indian soldiers between an armed militant & an apolitical Kashmiri when it comes to dispensing violence. Whether you agree with stone pelting or do not, it is never the oppressed who are responsible for violence when they defend themselves against military aggression or even if they are just expressing fury at a stolen life. All condemnations for violence should be directed at the occupying armies.
This photo of a Kashmiri stone pelter is indistinguishable from that of a Palestinian stone pelter. This was taken during the Indian Army crackdown on the 2016 uprising when thousands of Kashmiri protesters were attacked, injured, & killed by pellet guns, tear gas, & live ammo.
(Photo by Mukhtar Khan/AP)