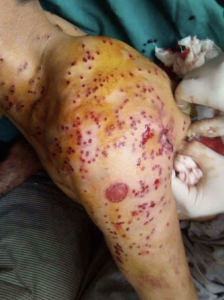 In this photo, medical staff extract lead pellets from the shoulder of a pellet gun victim in Kashmir. In India, pellet guns are only legal for hunting, pest control, recreational shooting, & competitive sports. In Kashmir, they are used by the Indian Army to disable, disfigure, blind, demoralize young protesters. Thousands of Kashmiris–young & old, protesters & those sitting in their family homes–have been struck by pellets. In a 2016 Indian court action which ruled pellet guns were legal against protesters in Kashmir, the Indian Army admitted to releasing 1.3 million pellets in just one month.
According to the Indian Army’s defense of pellet guns, the protocol is to shoot below the waist–as if shooting young men in the legs, testicles, & butt was more humane–but they shoot straight for the eyes, face, chest & back of the young men. Pellet guns were introduced in 2010 under the tenure of chief minister Omar Abdullah, now playing a role as Nelson Mandela when by his own admission he was detained for several months in a posh suite unable to decide between staying in his pajamas or putting on sweat pants. Those Kashmiri boys & young men arrested for protesting are subjected to torture, including sexual torture, & are held in squalid, overcrowded prisons. Omar the fool actually offered advice on how to survive as a political prisoner when his advice could only be appropriate for someone on extended visit to a health spa. In a free Kashmir, he would be prosecuted for the harm he has done to thousands of Kashmiris permanently suffering from pellet munitions.
Stand with Kashmiris & demand India end the use of pellet munitions & demand the immediate, unconditional withdrawal of all Indian forces from Kashmir.
(Photographer & date not identified; photo from Lightning Kashmir, May 25, 2020)