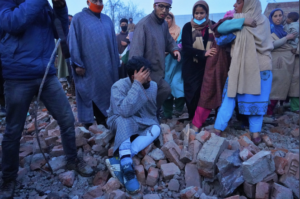 There has been extensive coverage of the military onslaught against civilian homes in the Nawakadal district of Srinagar because of the scale of destruction. But that military aggression & destruction of property has long been standard operating procedure for Indian forces in Kashmir. The encounters are so frequent that reporting is almost routine but the devastation is profound in every instance where civilians are terrorized & property demolished. Thank heavens for photojournalism which captures these events although at great danger for the journalists.
This photo from April 7th, 2020 is after a military onslaught in Arampora village in the Baramulla district of Kashmir where militant Sajjad Ahmad Dar was killed, family homes were demolished, & livestock killed. J&K police, Indian army soldiers, & CRPF paramilitary troops were all part of the nighttime operation.
Stand with Kashmiris & demand the immediate, unconditional withdrawal of all Indian forces from Kashmir.
(Photographer not yet identified, posted May 20, 2020)