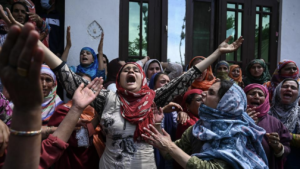 Retired Indian Army Major Gaurav Arya who was once part of the occupying army in Kashmir tweeted his view of the cold-blooded execution of Mehrajudin Shah: “CRPF jawan did the right thing & I support him. When a soldier stops you in an area where there is terrorism, don’t make the mistake of believing that his gun is ornamental. He has orders to shoot to kill.”
Guarav is the same amoral ass who wrote to Kashmiri youth in the 2016 uprising: “My issue is not with the Kashmiri youth’s having a complaint with India & that complaint finding its expression in protests. My issue is with Pakistan deliberately fanning strife in Kashmir. My issue is with Hurriyat getting daily wage labourers to throw stones at security forces & putting women & children in front as shields. You say that kids are killed. I ask, what’s a 5-year-old doing outside when stone pelting is going on? Why was he brought outside? You make it sound like someone entered a house, deliberately chose a 5 year old & said “Great…let’s shoot him”. No. These kids are brought outside so that when there is teargas, firing & confusion the kid gets hit in the chaos & Hurriyat can then have a funeral photo op.”
The photo is Kashmiris, who the ass accuses of using their children as human shields, mourning the death of Mehrajudin Shah.
(Photo from AFP, posted May 15, 2020)