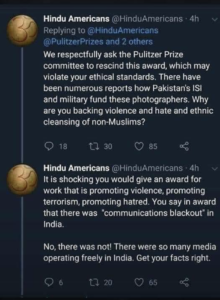 Just as Hindutva slugs attempted to impugn 14-year-old shepherd boy Hazim Shafi Bhat as a terrorist, they are attempting to impugn the J&K photojournalists who won the 2020 Pulitzer as Muslim terrorists. Every one of their photos of the occupation refutes a thousand Hindutva lies. The first & last refuge of nationalist, xenophobic, & supremacist slugs is to yell ‘Muslim terrorism’. It is a charge that remains in full force since it has wreaked havoc against the struggles of the oppressed for a very long time. Let Kashmir be its denouement.