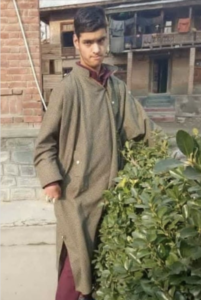 This is 14-year-old Hazim Shafi Bhat, a young shepherd boy with mental illness & physical disabilities who received several bullet injuries in an Indian Army hunt to kill operation & died on Sunday night. Indian media has a hard time getting the story straight on how young Hazim was shot & killed. It’s part of that ‘oh what a tangled web we weave when we practice to deceive’ thing. Some media report that Indian special forces set up a hunt to kill operation on Friday because they heard armed militants were in the Handwara area. That operation apparently went on through Sunday. Some reports also say two family homes & two cowsheds were destroyed because the hiding militants kept changing positions. Consider that army explanation. Consider the character of such a military operation that destroys everything in sight because the army heard there were armed militants holed up there.
Indian media has another alternative story which claims that special forces who were helping the J&K police enforce the coronavirus lockdown were attacked early evening today by several armed militants who eventually managed to escape. That report suggests that young Hazim was killed near the shootout site in the crossfire between militants & special forces. In this probably imagined scenario, the special forces are more worried about retrieving two bullet-proof vests they claim the militants took from special forces than they are about the death of a young shepherd boy who was likely absolutely terrified at being caught in the middle of a hunt to kill operation. As a very young boy with physical & mental impairments, he was probably paralyzed with fear & uncertain how to get out of harm’s way.
Maybe there was a shootout with militants; maybe there wasn’t. But if those special forces weren’t still engaged in military operations & were actually helping protect civilians during the corona pandemic, none of the special forces would have been killed & a little shepherd boy would not have died in terror.
Our heartfelt condolences to the family & friends of this young boy. May he Rest In Peace.
(Photo is Hazim Shafi Bhat, posted May 4, 2020)