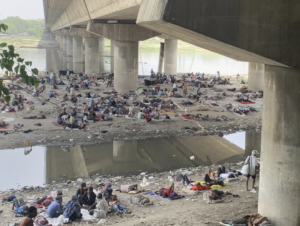 Hundreds of Indian migrant & day workers have sheltered under a bridge on the banks of the Yamuna River living on one meal a day provided by Sikhs at a nearby gurdwara. When this photo began circulating on social media, some Indian politicians who seem to have a high threshold for embarrassment were prompted to some grandstanding & began bussing these workers to shelter, promising them food & corona screening.

If India withdrew its one million troops from Kashmir, it would have more than enough resources to begin addressing such miserable poverty in India.