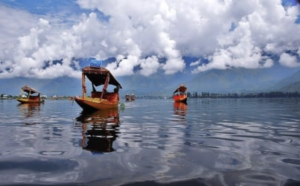 “Tale of a fallen paradise:
A wretched wizard from a distant land had his lecherous eyes on a land called paradise and invaded it…
Had few under his spell and let loose the creatures of dark on the rest ..
Exhibited black powers of arson and plunder…
But could never beat rivers and winds into submission..
Dwellers now await and yearn for a blessed being to vanquish the wizard and his spell.”