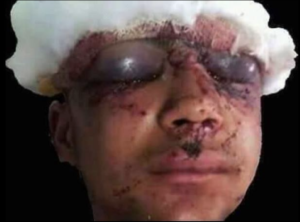 This young boy seriously injured by pellet munitions was one of over 15,000 people injured, disfigured, & disabled by pellet guns during the 2016 uprising in Kashmir. India designates them as non-lethal weapons & countered the massive protests with maximum brutality. Whilst Omar Abdullah emerges from his five-star accommodations to play the political prisoner, we should remember it was in 2010 under his tenure as chief minister of J&K that pellet guns against unarmed protesters were introduced in Kashmir. In response to international criticism for the use of pellet guns in 2016, then chief minister Mehbooba Mufti (still playing the political prisoner in five-star accommodations) said Indian troops were being instructed in the proper use of pellet guns for ‘mob control’, which means firing them below the waist. In what deranged universe is firing a volley of lead pellets at testicles, buttocks, & legs preferable to firing them at the head & face? Indian soldiers using pellet guns against unarmed protesters have always intended to inflict maximum harm on their entire bodies for the entirety of their lives.

Pellet guns are a monstrous human rights crime which Kashmiri supporters around the world must campaign against constantly especially now when Kashmiris can be charged with sedition for campaigning against such barbarism.