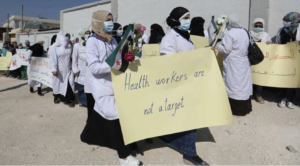 To the question, ‘how does war intersect with the coronavirus?’, the answer is ‘massively’. First, by creating millions of refugees who are denied asylum & are forced to live years in squalid, overcrowded conditions without healthcare or proper nutrition. Secondly, because bombing ambulances, hospitals, clinics, & medical personnel has become a primary military strategy even though it violates several international laws.

The Yemen Data Project reports that the Saudi-led coalition supported by the US, UK, & France has bombed 83 hospitals & clinics in Yemen & killed hundreds of medical personnel over the past five years. Syria & Russia target hospitals & hidden clinics in Syria using coordinates provided by the UN. Medical staff gave the coordinates to the UN precisely to prevent air strikes on healthcare facilities. Physicians for Human Rights is an organization which monitors attacks on medical facilities & workers in Syria & documented the collapse of Syria’s healthcare system. They documented at least 583 Syrian & Russian bomb attacks on medical facilities between 2011 & October 2019 where nearly 1,000 medical workers were killed. Under a 2012 counterterrorism law, the Assad regime criminalized any kind of medical care to its enemies, including just disinfecting the wound of an injured fighter. A special court has prosecuted tens of thousands, including medical personnel. As the films “The Cave” & “For Sama” document, thousands of medical workers have been forced into exile lest they be arrested, tortured, or disappeared in Assad’s gulag.

The US routinely bombed ambulances & hospitals in Iraq & continues to do so in Afghanistan. The result was the complete meltdown of Iraq’s healthcare infrastructure & the deaths of tens of thousands of Iraqis. Israel targeted ambulances & medical facilities in its 2014 seven-week bombing siege of Gaza, also after the UN provided coordinates & whilst Zionists claimed Palestinians used their children as human shields. Images from the morgues & hospitals during that siege haunt to this day.

If war has demolished the medical infrastructures & killed, jailed, or forced the exile of medical personnel, it is impossible that those countries could respond effectively to the coronavirus epidemic. It is also likely that occupying armies will be infected with the virus in an unfortunate case of ‘chickens coming home to roost’. In the case of Iranian militias in Syria, it is more likely they will bring the virus.

(Photo is women health care workers in Idlib, Syria protesting in September 2018 to demand hospitals be protected from bombing)