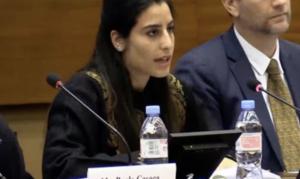 Kashmiri Syed Tehmeena has found her métier by posing as the voice of Kashmiri women in collaboration with India’s propaganda campaign to justify the occupation. She spoke recently at a forum on the sidelines of the UN Human Rights Council in Geneva where she impugned the Kashmiri freedom struggle as feudal & terrorist & implicated in the oppression of women. It’s unlikely she would be willing or able to debate Kashmiri women who represent the actual freedom struggle & who play such an important role in educating about the violence against women & girls that is central to the occupation. Kashmiri women play a leading role internationally in educating about forced disappearances & about the role of mass rape as a weapon of war. The only thing Tehmeena has to offer is lies & groveling before the oppressor.

(Photo is Tehmeena spewing her lies at Geneva)