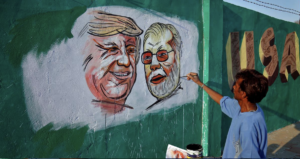 No trade deal between India & the US came out of Trump’s visit, possibly because investors are cautious in a time of rising fascism. But Trump & Modi did announce a $3-billion military defense deal as part of the US-India alliance to counter Chinese influence in the Southeast Asia region.

At the prompting of Pakistan, Trump is still talking about mediating between Pakistan & India over Kashmir while impugning Kashmiris as terrorists. How many times does it have to be said that Kashmir is a struggle for self-determination to which Kashmiri voices are central? It is not a territorial dispute between India & Kashmir to which Kashmiris are just a fly on the wall.

This grotesque wall painting was done as part of a beautification project for Trump’s visit in the city of Ahmedabad.