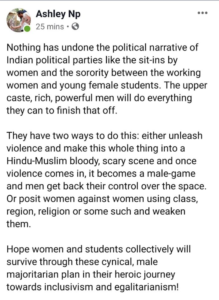 Some important insights about this post by Ashley Np by Basith Manakkadavan:

“There is death looming around the Muslim house holds of east-Delhi and as usual the liberal games are on schedule. As of now they are still on the look-out for a Muslim counter part and are yet to call it a clash between the titans. Gujarat, Muzaffarnagar and numerous such muslim pogroms were male games where the Muslim men were willful contenders, right? Now when those innocent Muslim lives are on the hideout from an imminent genocide, yes pit them against each other, as men and women! The women of Shaheenbagh and the lady students of Jamia hasn’t yet got the time to segregate between the male and female casualties and Muslim corpses of the anti-caa/nrc struggle. These liberals have got ample time with them!”