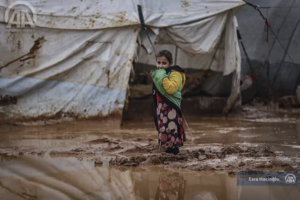 The White Helmets report that yesterday 28 people in Aleppo & Idlib were killed by Russian war planes that bombed more than 30 areas & towns with 74 airstrikes, 14 barrel bombs, & hundreds of artillery shells.

There has been no antiwar response anywhere in the world to the displacement & slaughter of hundreds of thousands of Syrian civilians, a majority women & children. As Assadist propagandists present it, the White Helmets are harvesting organs from the battlefields & this small child in a squalid IDP camp without food, healthcare, or electricity is gearing up for her al-Qaeda unit to take down the legitimate Assad dictatorship. Does any serious political person really want to argue with that kind of crap?

It is a distraction, become a circus sideshow, to engage in social media disputes with Assadists & Stalinists over whether Syria has or does use chemical weapons against civilians. If you don’t know the science & forensics of chemical warfare, it becomes an exchange of snotty repartee, not a useful debate about military & political realities. The issue of primary importance is that Syria, Russia, Iran, Hezbolah, & US-NATO forces are all engaged in war crimes by bombing civilians with any kind of weapons. The matter before us is how to rebuild a principled antiwar movement that will stand with the Syrian Arab Spring & demand the immediate, unconditional withdrawal of all foreign military forces & mercenaries.