Received this notice today from FB censors about a post of mine from August 11th, 2019–six days after the lockdown of Kashmir. The piece which violates Indian law is an article in the Indian journal Countercurrents by Amir Malik titled “Kashmir: struggle towards gender justice means end to foreign rule” which you can find on the internet, including on maryscullyreports.com. Will the Indian government be informing the several search engines that the article violates their national laws? And will they identify which laws the article violates because the information in the article has been reported in dozens of other articles, publications, & social media posts over the past five months of the lockdown. Fascist control of media & free speech is no laughing matter but the Keystone Kops beg comparison. 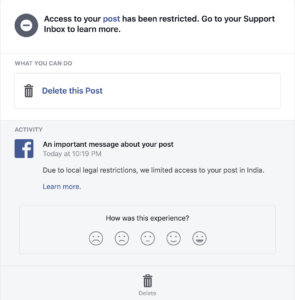