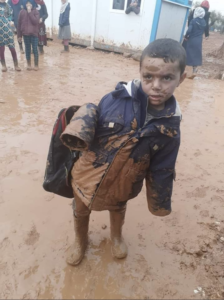 Are legions of Assadists & Stalinists really still vituperating against charges that Syria engaged in chemical warfare? That so resonates with the 17th century debate about ‘how many angels can dance on the head of a pin’, a reductio ad absurdum mockery of medieval Catholic scholasticism. Whether Syria & Russia used sarin gas or whether US-NATO used white phosphorous is not as important as challenging the right of all those countries to use any kind of weapons or bombs, including barrel & high-tech electronic weapons, against Syrian civilians.

The photo is a child displaced by Syrian & Russian bombing of Idlib in an IDP camp in December 2019.