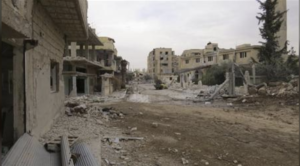 The Syrian Observatory for Human Rights reports that Assad forces near Damascus arrested 38 Palestinian schoolchildren who had been displaced from the Yarmouk refugee camp for defacing & tearing up a photo of Bashar Al-Assad. Twenty of the kids were taken from school & 18 were picked up in raids on their homes. The regime accuses the children of pledging allegiance to ISIS & refuses to release them from custody.

The Syrian Arab Spring uprising began in 2011 with the arrest of children & teenage boys for writing anti-Assad graffiti on walls in Dera’a, Syria. This photo is Dera’a in 2013 after the Assad dictatorship militarily attempted to punish & crush the Syrian Arab Spring.