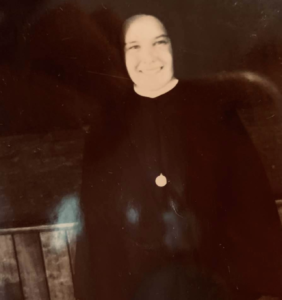 Thamina Eff asked me for a photo from my convent days. I was 18-years-old here. The nunnery & I were a bad fit in every way from the start. I joined after high school since as a working class girl in the early 60s I felt few options, no possibility for college, & the order worked with learning disabled children who I loved working with. I battled my way through the place, becoming known as the rebel nun, & left after 2-1/2 years, a feminist, a lapsed Catholic, & opposed to the Vietnam War where my brother was deployed.

I thought the order was inhumane in every way, especially in using physical violence against the kids. When I absolutely refused to hit the kids, they took me away from their care & put me in the kitchen to be trained as an institutional cook. We never had meat growing up so the sight of raw meat made me sick as well as the noxious smell of powdered eggs. The Vietnam War had started & when my brother was deployed there I wanted to follow it but they forbad me to read newspapers while I peeled potatoes. They would not allow me to go to college because the chaplain (an elitist sycophant) said I wasn’t smart enough & when I smarted out about that to him, they sent me every morning to his house to clean his toilet. It is a point of honor with me that he went months without more than a daily flush from me. I never touched his stinking pot but would sit down on his toilet top & read his magazines about the war. As a longtime history lover, that all was intolerable to me. Here I had always loved history & was not allowed to be part of my own times. So I asked to leave. They gave me no argument but were glad to see me go. They bought me a cheap, oversized dress & stuck me on a train to St. Paul without a dime.

I met some lovely women at the nunnery & some whack jobs too; can’t say I learned a lot except embroidery. But the experience really did make me a feminist, antiwar, & turn me away from the Catholic church.