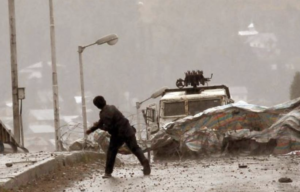 The photo (on left) of Faris Odeh was taken October 29, 2000. Faris was a 14-year-old Palestinian boy in Gaza protesting the Israeli occupation. Ten days later on Nov 8th, young Odeh was shot dead by Israeli soldiers in another stone throwing incident. Thousands of Palestinians attended his funeral. Captured in this iconic moment, he remains a symbol of courage & resistance not just to Palestinians but to all who struggle for justice. We commemorate his memory & martyrdom for Palestinian freedom.

Kashmiri photojournalist Showkat Nanda had the image of Faris Odeh in mind when he took the photo (on right) of a small Kashmiri boy facing off with stones against an Indian armored vehicle in 2009. In a very moving account, Nanda described how Indian paramilitary forces were shooting at unarmed protesters in the town of Baramulla. Young boys carried the body of an injured boy shot in the chest away from the scene & handed him to Nanda as he died. As gunfire cleared the scene of protesters, this small boy came running toward the paramilitaries “as if from nowhere” to stand defiant & fearless against the armored vehicle.

For his fearless defiance against occupation, young Odeh has been called an “adolescent daredevil.” Islamophobes claim his martyrdom is due to “Islamization” & the “culture of death” of Palestinian resistance even though many Palestinians are Christian. Some say stone-throwing is a distraction for children who do not understand the danger. Did the unidentified Tank Man of Tiananmen Square who stood defenseless against an army tank not understand the danger!? Did Rachel Corrie, mowed down by an Israeli bulldozer, not understand the danger? Is it conceivable that Odeh & this young Kashmiri boy stood in front of 60-ton vehicles without grasping the danger? Or is it more likely that commentators underestimate the ardor & commitment of young people, don’t have a clue about fearless commitment to justice & about the willingness to brave all against oppression & occupation?

We should take a moment to honor Faris Odeh on the 19th anniversary of his death & to honor this Kashmiri boy & all Palestinians & Kashmiris who have lost so much & stand so fearlessly against military occupation & colonialism.

(Photo on top of Faris Odeh from Laurent Rebours/AP; photo on bottom of Kashmiri boy by Showkat Nanda)