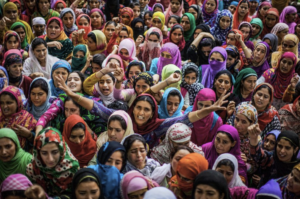 There are hundreds of photos of thousands of Kashmiri women protesting going back years up until today facing off against Indian troops using tear gas, pellet guns, & live ammunition. So it is not divisive to question, be skeptical or appalled by all the attention paid to the protest of a handful of elite Kashmiri women associated with Kashmiri leaders like the Abdullah family & Mehbooba Mufti who collaborate with India against the movement for self-determination. Their quisling relatives are under arrest in posh hotels to whitewash their role as collaborators while India stage manages their return to power as moderates who can be worked with. As Sultan Magami puts it, “These so-called protesters are the well heeled whose “conscience” never awoke for the past 30 years prior to this protest when Kashmiris had to suffer through worse when their brother/father ruled Kashmir….If Kashmir is in ruins right now, all the blame lies with these families. If a similar protest were held by everyday, ordinary mothers & sisters of Kashmir, all of them would have pellet injuries to show for it!”

When people are sustaining genocide, they don’t have time for delusions or false unities. Recognizing committed allies from collaborators isn’t sectarian or factional politics but a life & death question for the struggle for self-determination.

(Photo is Kashmiri women at the August 2015 funeral protest of 23-year-old Bilal Ahmad Bhat who was shot dead by Indian paramilitary forces on August 11th when they opened fire on unarmed protesters.)