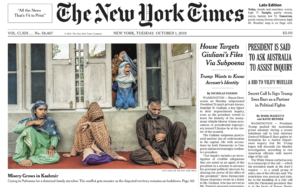 Front page of the NY Times, October 1st, 2019: just to give credit where credit is due, the extensive coverage of Kashmir in international media would likely not be happening were it not for years of campaigning by Kashmiri activists on social media to break the news blackout which has always prevailed about the Kashmiri struggle. Those activists, now forcibly silenced, changed the narrative from Kashmir being a territorial dispute between India & Kashmir to the Kashmiri struggle for self-determination against Indian colonial occupation.

There will be attempts, subtle at first, then more aggressive, to move the narrative from Kashmiri self-determination back to India’s struggle against “radical Islamic terrorism” in Kashmir. It is entirely due to the work & groundwork laid by Kashmiri activists that such a shift in narrative will be difficult to execute. Though they cannot hear us, we honor the work of those activists who helped pioneer social media as a venue to campaign against war, occupation, genocide.