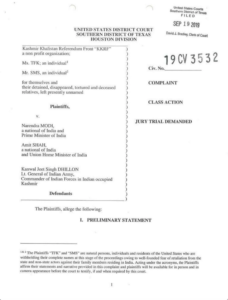 Today, just three days before the Howdy, Modi rally in Houston, Texas, the US District Court in Houston issued a summons to Modi, Amit Shah, the Indian Minister of Home Affairs behind the siege & blockade of Kashmir, & Kanwal Jeet Singh Dhillon, the commander of Indian forces in occupied Kashmir. They are ordered to respond to a class action suit where a jury trial is demanded to answer charges of unlawful arrest, forcible disappearance, & torture. The suit is filed by Kashmir Khalistan Referendum Front. Can they be sued in a US court for human rights crimes? An Israeli law firm sued the Palestinian Authority in a New York court & won. Bhopal was more than once litigated in US courts for the 1984 Union Carbide industrial disaster. It goes without saying that the victims lost, as they did in India’s Supreme Court. A Spanish judge issued an arrest warrant against Pinochet for crimes against humanity in the 1974 Chilean coup.

So yes, the Modi gang can be sued in US court but it’s a long shot whether the case will be allowed to proceed & a longer shot whether it will eventually be victorious. US judges are not the most rebellious, independent, human rights kind of people in the world & considerable political pressure will be applied on them.

(Thanks to Lina Ewald for this information)