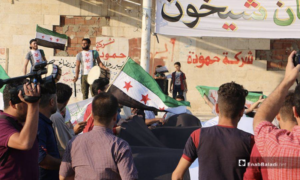 Showing the tenacity of the Syrian Arab Spring against massive slaughter by Syrian & Russian war planes & ground forces in Idlib, over 150 people came out to protest the fall of Khan Sheikhoun to Syrian & Russian forces after ruthless bombing for months with internationally prohibited weapons. Most of Khan Sheikhoun, which sustained a sarin gas attack by Syrian forces in 2017, has been reduced to rubble in what corrupt political forces are lauding as a ‘liberation’.

Protesters demanded the fall of the Assad dictatorship & the immediate withdrawal of Syrian, Russian, Iranian, & paramilitary forces from Idlib.