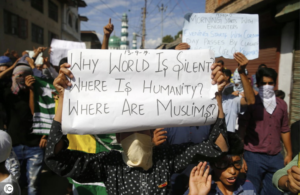 It’s heartbreaking to see placards from protests in Kashmir asking why the world is silent whilst they endure genocide. That merciless blockade means they cannot hear the thunder of voices raised around the world on their behalf. But India can. Which is why we must continue & add force to our continuing protests with a boycott of Indian products. In a message received from a Kashmiri returning home, he asked if I had any message for anyone there. My only message would be to hearten them with reports that a worldwide movement has emerged, they no longer stand alone, their struggle has become internationalized & personalized by hundreds of thousands of people all over the world, & not just Muslims, Kashmiris, & Pakistanis. Their suffering is the first thing we think of when we get up & the last thing we think of when we go to sleep. And it will stay that way until the siege & blockade have been lifted.

(Photo is placard at protest in Soura neighborhood of Srinagar on September 13th, 2019)