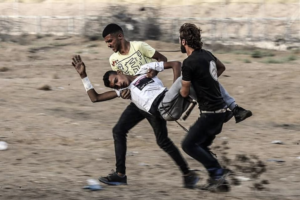 Israeli journalist Gideon Levy wrote an article on August 29th titled “If there’s such a thing as a murderous culture, then it exists in Israel” in response to Haaretz culture & literature editor Benny Ziffer who wrote a vile FB post after returning from a visit to an illegal Israeli settlement in the West Bank. As an Israeli Jew, Ziffer probably cruised through the ubiquitous military check points & turned a blind eye to the thousands of home & village demolitions by Israeli bulldozers & soldiers to make room for Israeli settlers from all over the world. Ziffer wrote:

“En route I looked at the Palestinian villages alongside the Jewish communities, & I thought of how for the Palestinians murder is a type of sport or enjoyment, perhaps a substitute for erotica. From that perspective we will never have anything culturally in common with them.”

Statistics, however, speak louder than Ziffer’s unspeakably racist, supremacist, & putrid hate. Between March 2018 & March 2019, 30,398 Palestinians were injured by Israeli snipers, including 3,175 children & 1,008 women. Eighty-seven percent of those injuries were to the limbs, intended to permanently disable protesters. 267 Palestinians were killed, including fifty children, six women, one elderly person, journalists & paramedics. That does not include those Palestinians shot & injured or killed by Israeli forces in the West Bank or East Jerusalem. This is properly called genocide & to suggest that Palestinians engaged in resistance to it are doing it for sport or sexual arousal is about as grotesque as racism gets.