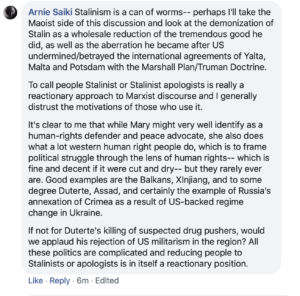 Many may not understand exactly what Stalinism represents in modern politics since the Soviet Union has long-since collapsed & one would think its apologists right along with it. But that isn’t the case. It’s an entrenched, entirely deranged political method with many faces but which always remains rooted in the original matrix of support for Stalin, his pogroms, gulag, mass murders, violent repression of democracy. There are sophisticated types like Michael Parenti who claims Stalinism no longer exists but wrote a pernicious Stalinist apologetic for the Chinese occupation of Tibet. Then there are the types most frequently encountered in political movements who use bullying, guilt-baiting, stonewalling, even physical threats to get their way. That’s because their ‘theoretical’ skills are an embarrassment of cognitive disorders. This Stalinist thing was deleted from a discussion on my wall but shows the mangled nature of their political reasoning & why Stalinism is finding its final rotting place within fascism. If only those who call themselves Marxists could learn to make these distinctions.