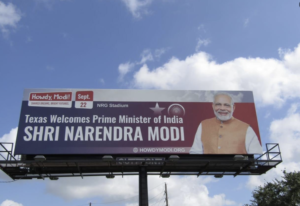 Why is it that when political figures get involved in genocide, the honorifics start raining down on them like nuclear radiation? Kissinger got the Nobel Peace Prize while the US was carpet bombing North Vietnam? In 2012, Suu Kyi picked up her belated Nobel & whole bushel baskets of human rights awards whilst in Burma tens of thousands of Rohingya were running for their lives & she had nothing to say about that when asked. Last year, Modi was given the UN’s highest environmental award, the ‘Champions of the Earth Award’. Apparently, the UN hadn’t taken a look at the size of the toxic waste dumps in India or the number of Indians forced to pick through them to earn a living. Just last week, he got another worthless piece of crap from the UAE which has been bombing Yemen for close to five years & now the Bill & Melinda Gates Foundation have announced that when he comes to the US later this month, they’ll be giving him their 2019 ‘Global Goalkeeper Award’ for a cleanliness program against public pooping. Part of that program involved India building waste management programs & 90 million public toilets so public pooping wasn’t necessary. If would be really good to know how many toilets India actually built & how much of the money instead lines the pockets of government officials.

There’s another thing the Gates Foundation has going on with Modi that they probably don’t want too well known & that’s collaboration with the Indian government & USAID in population control/eugenics programs. We’re not talking family planning centers with prenatal care, maternal & infant nutrition programs, birth control, & abortion services but eugenics & forced sterilization camps which are the cornerstone of India’s family planning system. In 2012, the big players in population control/eugenics programs, including the Gates Foundation, made India one of their target countries & pledged over $4.6 billion to expand eugenics programs. It’s another form of genocide for the poor & dispossessed, in particular oppressed castes.

After attending UN stuff, Modi will be traveling to Houston, Texas on September 22nd which has one of the highest concentration of Indian-Americans in the country. They’re going to be holding a ‘Howdy, Modi’ rally at a stadium that holds 70,000 even though his previous rallies in the US at Madison Square Garden in NYC in 2014 & Silicon Valley in 2016 drew about 20,000. The organizers claim 50,000 have already registered. All the Texas politicians will be there, including the mayor of Houston, the governor & senators. It will be larger than 2014 & 2016 because it will be a Hindutva political show of support for the siege & blockade of Kashmir. What’s important to Kashmiri supporters is that it says a lot of Indian investment is tied up in the state of Texas & a lot of Texas investment in India. That makes a #BoycottIndia movement here much more compelling & much more threatening.

Anyone in Texas or elsewhere who is interested in holding Free Kashmir rallies during Modi’s visit & that ‘Howdy, Modi’ nonsense should start now to collaborate.