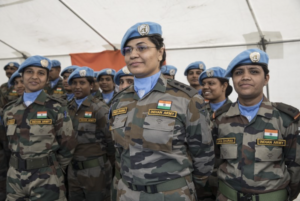 The colossal outrage of the UN sharing this photo on September 1st, 2019 of Indian troops in the Democratic Republic of the Congo is of a piece with the UN Democracy Fund accepting hush money from India on August 21st, sixteen days into the blockade.

But while we’re at it, let’s talk about how UN troops in DR Congo hold the record for rape & sexual assault of Congolese women & children–thousands of cases in the time UN forces have been deployed there. Is that why they sent women troops, hoping to lower the rape rate? Make it a ‘gentler, kinder’ kind of brutal occupation? Let’s talk about how UN troops to Haiti brought a cholera epidemic that made almost 900,000 people sick & killed almost 10,000 Haitians & then how the UN weaseled out of any responsibility for reparations? As if there were any way to make reparations for 10,000 family members.

So yeah, we get it. We get why the Indian Army has soldiers stationed in DR Congo. We just don’t get why the UN is so damn stupid that they would post these photos if not as a backhanded way to stand with India’s occupation of Kashmir.