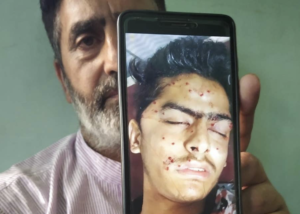 An Indian media source reports that 18-year-old Asrar Ahmed Khan from Srinagar died in hospital from pellet injuries sustained August 6th. An Indian Army official denied that he died from pellet gun injuries but claims “he died due to stone pelting…it is for you to decide who is trying to kill whom.” Do Indian propagandists think we’ve never heard ‘blaming the victim’ before? Forensic science would be greatly interested in how he killed himself by stone pelting. Did a stone ricochet or was he hit by another stone pelter? Does India think we are so stupid that we would believe this deplorable, stinking foolishness?

The photo is Firdous Ahmed with a picture of his son Asrar shortly after he was admitted to hospital on August 6th.