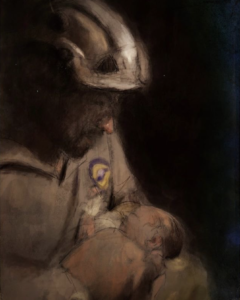 It’s a Guernica scenario in Idlib & Assad propagandists are gloating over fascist tourists prowling with cameras through the rubble in Aleppo. The Stalinist & Assadist cult that replaced the antiwar movement is still defending that abandoned embassy in DC & shouting ‘hands off North Korea & Iran’. There is an existential crisis in progressive politics when they cannot distinguish Islamophobic & anti-Semitic politics & join forces with the ‘war on terror’ in support of dictatorship & carpet bombing civilians in Idlib. Actually, it’s beyond existential crisis to requiem time. They’re dead as a political force & good riddance to them.

Sketch is from an eyewitness photo of a White Helmet cradling an infant he rescued from a children’s hospital targeted by Syrian & Russian bombers.

(Sketch is by artist Marc Nelson)