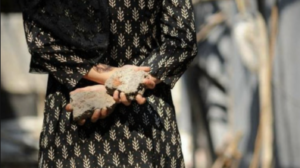 A. G. Noorani, a prominent Indian jurist, has an article in The Wire, an Indian news website, titled “Murder of Insaniyat, & of India’s Solemn Commitment to Kashmir,” which is a legal elaboration of the abrogation of Article 370. Unfortunately, the subtitle stands out like a sore thumb: “Kashmir’s mainstream leaders should prepare a manifesto of the United Movement of Kashmir & take to the streets, after renouncing all forms of violence, & assert their right to freedom of speech & freedom to move in peaceful procession.” What’s this ‘renouncing all forms of violence’ stuff? Who are an unarmed, occupied people called on to renounce? The militants, most of whom have been gunned down like beasts in hunt to kill operations? Stone pelters, mostly working class kids who operate as a civilian defense guard for unarmed protesters? Is Noorani asking Kashmiris to finger them & turn them over to Indian occupation authorities, to give up the Kashmiri right to defend themselves against army violence, including ‘by any means necessary’?

Who are these “mainstream leaders” he proposes? Mehbooba Mufti, Omar Abdullah, Shah Faesal who are outright collaborators now playing the role of political prisoners in luxury suites while human rights activists & leaders, stone pelters, & hundreds of others are locked up in India’s gulag?

In the article, he also says “whatever happens, Jammu cannot leave India.” So how much value is his legal position if he starts out by denying Kashmiri self-determination? The old jurist has to learn that in a struggle between democracy & fascism, there is no middle ground, there is no playing both sides of the street. He’s telling them to settle for parades & getting their mobile phones & internet service turned back on without using them to campaign for #azaadi. With such a contemptible, harmless proposal, the Kashmiri Intifada will have to remain on & there will no renunciations of other Kashmiris forthcoming.