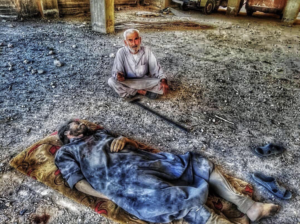 An elderly man grieves the death of his son killed by Syrian bombing of Kafranbel, Idlib. They were among the 2.5 million civilians still living in Idlib after 550,000 have fled for their lives from the bombing. The corrupted antiwar movement, led by aging Stalinists like Sara Flounders & Jeff Mackler, claims there are no civilians living in Idlib & these are just terrorists posing as civilians. “Crisis actors” is what propagandists Bartlett & Beeley call them. Such a betrayal of antiwar principles is monumental & unforgivable.

Stop the bombing of Idlib. All foreign military forces & mercenaries out of Syria!