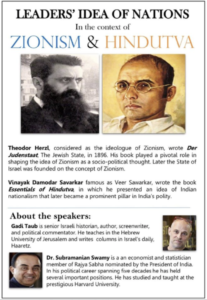 Zionists in India are using the siege & blockade of Kashmir to strengthen their collaboration with Hindutva nationalists & create a mutual aid society for Indian & Israeli colonialism. There has long been strong support for the Palestinian struggle in India, including conferences & massive protests in their defense. But the anti-colonial movement against the occupation of Kashmir remains weak & fragmented when it would be one of the most important political developments for both Kashmir & India.

The reason for such weaknesses are never just moral failure or lack of commitment by activists but almost invariably reflect fragmentation & weakness among progressive political forces who initiate & organize these movements. Indian progressives have been influenced as much by Assadism & Stalinism as elsewhere which reflects a debilitating & generalized theoretical & political corruption. Overcoming this colossal failure begins with an analysis of the state of progressive forces, how they got to this point, & forging a new movement without the pernicious influences of Assadism & Stalinism which in their present incarnation are up to their eyeballs in Islamophobia & anti-Semitism.

(Photo is poster of event sponsored by Israel in Mumbai)