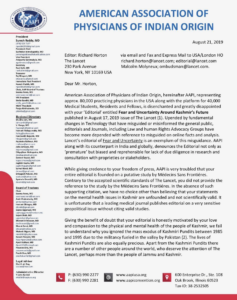 Indian doctors living in the US wrote this truly detestable letter to The Lancet protesting the editorial about the health consequences of the occupation on Kashmiris–health consequences that only a shameless propagandist with a criminal mind would deny considering only India’s use of pellet guns against unarmed Kashmiris which has injured, disabled, & killed thousands. But there are also health consequences to the Indian Army’s use of rape as a weapon of war, to those nearly 10,000 families who have lost a loved one to forcible disappearances, to those thousands who sustained incarceration & torture, for the small children growing up under the presence of overwhelming & hostile martial force. Apparently to Hindutva doctors, that Hippocratic oath thing means nothing. Kind of like how ethical standards meant nothing to Dr. Mengele & the holocaust doctors of Nazi Germany. But it does mean this organization should be registered as a foreign lobbying organization for the Indian government, functioning not unlike AIPAC for Israel.