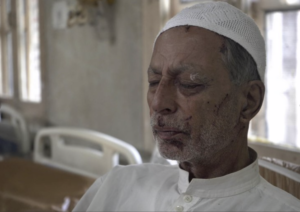 Kashmiri Md. Siddiq was pummeled with a pellet gun fired by an Indian occupying soldier whilst returning home from his mosque in Srinagar. He sustained serious damage to his left eye & pellet hits all over his back. He is being treated in hospital for his injuries.

One doesn’t have to be a protester or stone pelter to be attacked by Indian occupying forces. You can be a middle-aged man returning from prayers, a child on a motorbike, or simply sitting in your family home. That’s how indiscriminate the military occupation of Kashmir is.