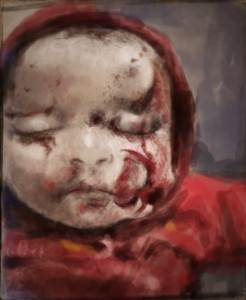 This child is one of several killed by Syrian & Russian bombers last Friday in Idlib. The work of Kashmiri activists on social media, including expressing solidarity with the Syrian Arab Spring, generated the emergent international solidarity movement that will help stay the aggression of the Indian government. There has been no such movement for the Syrian Arab Spring because of the corruption of antiwar & progressive forces who instead used social media to support the Assad dictatorship & the bombing of civilians. This is a political catastrophe & betrayal of epic proportions.

As we stand with Kashmiris, they would not want us to be silent on the suffering & struggles of the Syrian, Palestinian, Rohingya, Uyghur, Yemeni, Afghan, Iraqi, & Somali people.

(Sketch from an eyewitness photo by artist Marc Nelson)