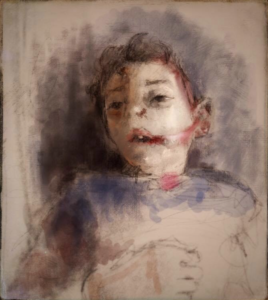 There are expressions of solidarity with the Kashmiri freedom struggle from the Syrian Arab Spring in Syria & at rallies elsewhere. Kashmiri voices are silenced now but they have always been exemplary in solidarity, including with the Syrian people against the Assad dictatorship & the bombing of civilians.

This is a sketch by artist Marc Nelson from an eyewitness photo of a small boy killed by Syrian & Russian bombing in Idlib, now in its third month. May this young child Rest In Peace.