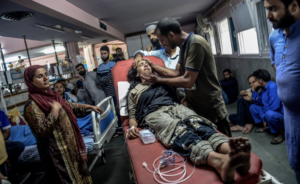 This little 14-year-old Kashmiri girl Afshana Farooq was nearly trampled to death in a ‘stampede’ caused by Indian soldiers opening fire on unarmed protesters after Friday prayers on August 9th. Her dad said, “We were just marching peacefully after prayers. Then they started shooting at us.”

Media should be careful about its use of such words as ‘stampede’ usually reserved for horses, cattle, or Christmas sale shoppers at the mall. It’s an absolutely terrifying thing to be in the middle of a large crowd panicking from being shot at. I only know that from being in the middle of a large protest that was panicking because it was unable to move when I thought I would be trampled to death. I also know it from a Palestinian rally being attacked by NYC police with truncheons & on horseback. If there’s any ‘stampeding’ going on, it’s by Indian soldiers. It’s not nitpicking language so much as presenting who is at fault with absolute clarity.

(Photo by Atul Loke for The NY Times)