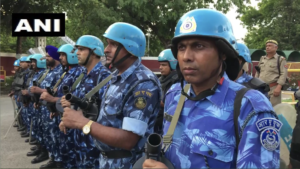 Asian News International (ANI) reported that India beefed up its security “as a precautionary measure” at Aligarh Muslim University in Aligarh, Uttar Pradesh, India when students announced a debate on scrapping Article 370. This is terrifying. India can’t call itself the largest democracy when it brings storm troopers & jackboots to universities to intimidate & bully students holding a debate. Whatever India is doing in Kashmir will be reproduced in every other state in India. Other governments are following events in order to develop their own tactics against civil unrest. Hold on to your hats cause this fight against barbarism is going to be a bumpy road.