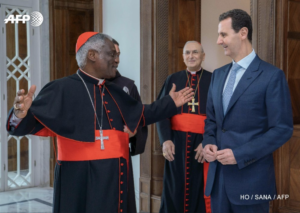 Serving as envoy for Pope Francis, Cardinal Peter Turkson accompanied by Cardinal Mario Zenari (the pope’s ambassador to Syria), delivered a letter to Assad which expressed the pope’s “deep concern” about the “humanitarian situation in Syria,” referring to the slaughter by Syrian & Russian forces in Idlib. The Vatican Secretary of State said, “The Pope is following the dramatic fate of the civilian population with apprehension & great pain, above all for the children caught up in these bloody bombings.”

The pope’s concern about Syria is nothing new. He’s been sending letters back & forth to Assad since he became pope in 2013. After six years of temperate diplomacy where he takes no sides & makes no condemnations, Pope Francis might want to speak more boldly now–at least as boldly as the children of Idlib who cry “Stop the bombing. We are civilians, not terrorists.”

It’s problematic that Pope Francis would send a guy like Cardinal Zenari along on this mission of peace since Zenari had made his associations with Assadism quite clear, including by attending a regime bash in Aleppo in January 2017 to celebrate the ‘defeat of terrorism in Aleppo.’ He also posed for photos with Syrian journalist Kinana Allouche who posted selfies & videos of herself gloating over the bodies of opposition soldiers & laughing over the bodies of children killed in Aleppo. Any court of law would call that strong evidence that Zenari isn’t squeamish about slaughter or at least goes along with the Assad regime charade about fighting terrorism rather than the Syrian Arab Spring.

Hardcore Assadists of the fascist kind like Bartlett, Beeley, Kevork Almassian were outraged by the pope’s letter. In a rant on Syriana Analysis, Almassian (who belongs to the German extreme right) said he was ‘speechless’ that the pope was not “thanking Assad for the fight against Wahhabi terrorism” that is ‘butchering tens of thousands of Christians in Syria.” He was aghast at the “audacity” of the pope ‘asking Assad to end the suffering in Idlib instead of heading to Brussels, Washington, & Ankara to ask the leaders to stop supporting terrorism.’

It’s long since time for Pope Francis to drop the diplomatic niceties & publicly denounce Assad for indiscriminate bombing of towns, markets, fields, mosques, hospitals, schools. But Pope Francis traveled to Burma at the height of the Rohingya genocide & remained silent; in visiting Israel, he played equivocal about the Palestinian struggle, thinking a few prayers at the apartheid wall would substitute for solidarity; & regrettably he is trying to outsmart the laity on the crisis of rapists among the clergy. We should not expect from him the same courage as we see from the little kids in Idlib.