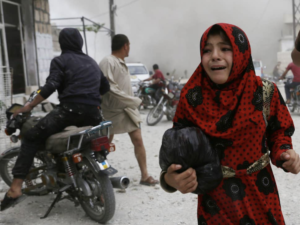 This crying, scared little girl in the town of Kfar Ruma, Idlib is running for cover from airstrikes by Syrian & Russian bombers. Contrary to the claims of the Assad dictatorship & its irredeemable guppies, there were over three million civilians in Idlib, including one million children, when the bombing offensive began on April 26th. Over 300,000 have been forced to flee for their lives. Idlib is not a place where only terrorists live–even if we agreed about who was a terrorist under the rubrics of the Islamophobic ‘war on terror.’

Political analysis is complex because human societies are complex & contradictory so there are many issues that need to be debated for clarity & understanding. But bombing or shooting at civilians is not one of them, especially if barrel bombs & incendiary weapons are involved. There is no possible & certainly no principled justification for carpet bombing Idlib for now almost three months. For Assad, his propagandists & his guppies to claim only terrorists are holed up in Idlib & that all civilians long ago fled is nothing more than a contemptible lie to justify bombing the place to smithereens. Like it or not, even Assadists have to concede to the Geneva Conventions or take their place with war criminals.