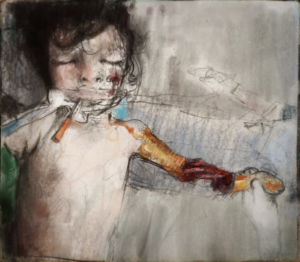 Syrian & Russian bombers continue targeting Idlib for 71 days in a row. The UN reports that 330,000 people were displaced from the region just during the month of May. The Syrian Network for Human Rights which monitors casualties reports that 544 civilians, including 130 children, have been killed in hundreds of bombing & ground strikes & that 2,117 people have been injured.
This is a sketch based on an eyewitness photo from an operating room in Idlib where bombing victims are being treated or declared dead.

Stop the bombing in Idlib. They are civilians, not terrorists.