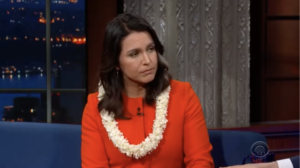 The discussions among Assadists about the politics of Tulsi Gabbard are a cornucopia of idiocy. Some argue that she has changed from 2014 when she defended Israel’s seven-week bombing siege of Gaza by saying Israel was defending itself against terrorists who hide behind human shields in schools & hospitals. Most Assadists who support her claim she’s changed since then but her ‘war on terror’ rhetoric on Syria does not support that, even if they do share her Islamophobia & anti-Semitism. Taking childlike, wide-eyed credulity to the breaking point, Ali Abunimah tweeted: “Tulsi Gabbard: end the wars & give everyone free, quality healthcare. What’s not to like?” Keep the tooth fairy away from our man Ali.

Assadists like Eva Bartlett have a different take on Gabbard’s metamorphosis because despite strong support for the Assad dictatorship, in her hustle for votes Gabbard had the temerity to say “There is no disputing the fact that Bashar al-Assad & Syria is a brutal dictator. There is no disputing the fact that he has used chemical weapons & other weapons against his people.” If Gabbard isn’t kissing Assad’s ass, her Assadism isn’t good enough for Eva. Some Assadists may be fooled by Mr. & Mrs. Assad’s European style, but not our Tulsi who recognizes an Arab when she sees one & denounces them all as terrorists.

Stop playing stupid. Gabbard has left a record of votes & cosponsored bills & media interviews & globe-trotting that testify overwhelmingly to her Islamophobia, Zionism, anti-Semitism, Hindutva nationalism, & collaboration with dictators like General Sisi. If she is your chosen candidate, you are right-wing & there are no two ways about it. Aloha or suck on that!

July 2014 MSNBC interview with Gabbard where she lays out her support for Israel: https://www.msnbc.com/taking-the-hill/watch/should-us-be-involved-in-ukraine-conflict–312796739629?fbclid=IwAR2WGUmeSC13D5-