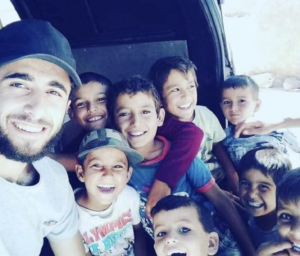 This Syrian man & these children are not terrorists. The young man is 24-year-old Omar al Dimashqi (a name he took on for security purposes), a media activist from the Damascus suburbs who died June 23rd in a Turkish hospital from wounds sustained in a car bomb as he traveled to Idlib. May he Rest In Peace.