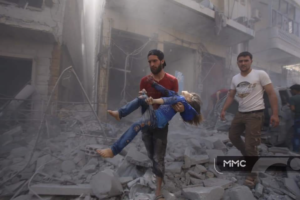 This is a scene on May 26th from Syrian & Russian bombing of Idlib where today they are bombing several cities & towns. The corrupted international antiwar movement has not held a single protest against this carnage nor has any of them said a single word of protest. If you go to the social media walls of leading figures, they are talking about a US threat to the Galapagos, defending that abandoned embassy in DC, the candidacy of Tulsi Gabbard or Bernie Sanders, the vagaries of British electoral politics, denouncing the Hong Kong protests as anti-capitalist malcontents, the latest publicity stunt of Medea Benjamin to make herself the center of attention.

For so long we hoped the carpet bombing of civilians, the endless massacres with barrel bombs, Assad’s gulag where thousands have been tortured & hung to death would bring people to their senses & reawaken their political principles to oppose the bombing of civilians & repudiate their political degeneration calling for self-determination for a dictator. But they have dug in their heels & continue to support dictatorship & death squads over the Syrian Arab Spring uprising.

A new principled antiwar movement must be built & the time to start doing that is now, even if it’s one person at a time standing against this carnage.

Stop the bombing of Idlib!