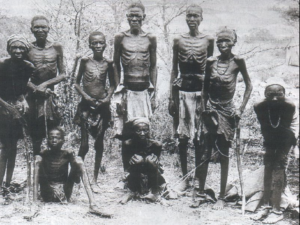 The US Holocaust Memorial Museum in Washington DC just issued a statement denouncing the analogy made between Nazi concentration camps & the refugee concentration camps on the US southern border. While it is absolutely so that the Nazi genocide of Jews & others was on an industrial scale, with gas chambers & crematoria, what the Zionists behind the museum are objecting to is an analogy that undermines their insistence that no one in human history has suffered like the Jews. It’s an expression of ethnic supremacy, a defining feature of Zionist ideology, which attempts to separate the persecution of Jews from that of black & brown people under colonialism. Not just separate the persecution of Jews from others but Zionism has brokered an agreement with colonial powers at the expense of the international struggle against racism, xenophobia, white supremacy. As we know now, that has only increased the quotient of hatred for Jews, strengthened racism & white supremacy, & not made the world one whit safer for Jews.

The Nazi holocaust was colonial genocide brought to the European metropolitan centers since the peoples of Asia, South Asia, Africa, the Americas, the Pacific had for centuries known the scourge of merciless, industrial scale genocide, including the Atlantic slave trade where millions of Africans died. The Holocaust Memorial Museum wants us to ignore that history to justify the existence of Israel as a Jewish-only state. How low can you go to deny the undeniable analogy between Auschwitz & what is happening to small children in US concentration camps? The political point of the analogy is not exaggeration or hyperbole but to define the reality & express alarm at where the US & other countries are headed with their barbaric, colonial treatment of refugees if we do not organize to stop them.

Describing the different forms of US & European genocide or the methods of extermination is as difficult as looking at photos from the Nazi holocaust. There have been hundreds of genocides involving extermination of millions of people considered subhuman. Zionism is a right-wing ideology that would deny all that to justify Israel which is why the genocide of Palestinians comes naturally to them.

This photo is Herero & Nama survivors of the 1904-1908 genocide (in present day Namibia) by the German Empire after they rose up against German colonial rule. The ugly political truth is that Zionists like the US Holocaust Memorial Museum deny any analogy between this genocide & the Nazi genocide. In fact, as the first genocide of the 20th century, it is the prototype.

(Photo from Wikipedia via Jewish Currents)