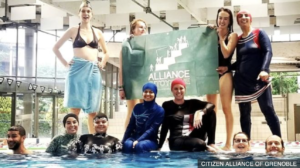 Grenoble, France authorities shut down two public pools during what is called an “unprecedented heatwave” after two women showed up to swim in burkinis. The two women went there as part of a protest campaign by women against the ban on the bathing suit worn mostly by Muslim women. Islamophobia shows its most malignant features in the so-called ‘war on terror’ by portraying all Muslims as terrorists. But whether used to justify wars (especially in Afghanistan & Syria), the expanding bans on veils all over the world, or the ban on burkinis in France, it focuses its venom on women. That’s why they’ve called on leading US & European feminists to support those wars & bans on veils as a way to liberate Muslim women from men & religion. The racism & misogyny of it is beneath contempt but still we must take a public stand against it to prevent this social derangement from spreading like a destructive virus.

(Photo from Citizen Alliance of Grenoble)