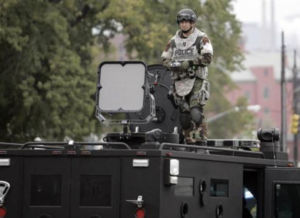 India Today reports that sound cannons will soon be used by the the Indian army “to control stone-pelting mobs in Kashmir” as an alternative to pellet guns which have blinded, disfigured, & killed thousands of unarmed protesters. As DNA India reports it, “during crucial anti-terror operations in Kashmir {the Indian Army} will no longer depend on pellet guns to disperse the human obstacles.” DNA India also refers to protesters against colonialism & occupation as ‘rampaging mobs’ who use children as human shields.

The Indian military has only initiated the process of transition by submitting requests to manufacturers asking them to detail specifications of their sound cannons by June 30th, 2019 & to give an assessment of the impact on human ears. This is a dog & pony show put on by the Indian Army. India has experience with using sound cannons since the Delhi police have had five of them since 2013 “to tame unruly protesters.” They can also draw on experience & studies from several other countries which use them: Australia, Azerbaijan, Brazil, Canada, Czech Republic, Georgia, Honduras, Hong Kong, Israel, Japan, Philippines, Poland, Singapore, South Africa, Spain, Sweden, Thailand, Turkey, UK, UK, Vietnam, Romania, Norway, Algeria. The CIA uses them as a form of torture in Guantanamo & other torture centers. The use of cacophonous sound to torture & harm is a long-established practice of war.

Sound cannons were first used in the US in 2009 against G20 protesters in Pittsburgh & have become part of the militarization of the police in several states. Most egregiously, they were used against the Ferguson, Missouri Black community in the 2014 protests ignited when unarmed 18-year-old Michael Brown was shot down by a policeman without provocation. They were also used in Washington, DC against the Women’s March in 2017.
A Kashmir Walla article called this transition from pellet guns to sound cannons “a major development” but that is far too much credulity. Pellet guns have proven so effective in disabling protesters & civilians, that it is highly unlikely India will replace them but will only augment them with sound cannons, technically called Long Range Acoustic Devices (LRAD). From repeated studies, it is already known that sound cannons can cause permanent hearing damage or loss, neurological damage, long-term injury to the brain & central nervous system, lung & cardiovascular damage.

Rather than being part of a more humane approach to destroying the Kashmiri struggle for self-determination, sound cannons are a weapon to increase harm to protesters. In their specification requests to manufacturers, the Indian government said they would require certification from Indian & medical organizations about their impact on human hearing & the “normal threshold of pain for children.” That could be called an admission by the Indian government that they intend to harm children with the sound cannons or at least know that children will be adversely affected. But does anyone really believe that a government which disfigures & disables thousands of unarmed protesters with pellet guns, uses mass rape, arrests without cause, barbarically tortures, & disappears thousands of young people, actually cares about hearing loss or neurological damage among civilian protesters?