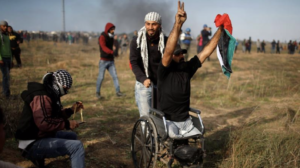 When you consider how Israeli snipers target the legs of young protesters, creating hundreds of amputees; how India uses pellet guns to blind, disfigure, & disable hundreds of unarmed protesters; how Burma created long-term disabilities by shooting at fleeing Rohingya (as documented in the Physicians for Human Rights report “Shot While Fleeing”); it seems that creating mass disability is a primary military tactic to destroy political resistance to occupation & genocide. That puts the struggle for disability rights in the heart of the struggle against occupation & genocide.

Disability has always been an issue in war, including for the armies deployed. Just in Afghanistan, land mines & unexploded ordnance cause 140 civilian incidents every month, at least 30-percent of them killed & the others sustaining amputations. Over the course of 18 years of war, the disability rate would be upwards of 20,000. That’s just in one country. That puts the struggle for disability rights in the heart of the struggle against war.

The photo is 29-year-old Ibrahim Abu Thurayyah who was killed by an Israeli sniper in December 2017 while protesting at the Gaza border. He was a double amputee who lost both legs & a kidney in the 2008 Israeli bombing siege of Gaza. May he Rest In Peace.