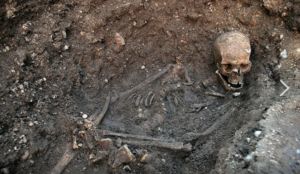 I have the shameful habit of laughing at some of my own goofy humor, especially that directed at the British moochocracy. When someone else ‘liked’ this, it was an excuse to repost it. My simple mind never tires of ridiculing feudalism & its bootlickers.

February 11, 2013
Big news from England is they found the bones of Richard III who died in 1485. Our man’s been dead 528 years so those in the former colonies do wonder why the hell the big deal!? They had to use radiocarbon dating & mitochondrial DNA to analyze his bones found under a parking lot in Leicester. Isn’t this taking royal watching to a whole new level!? The history around the old boy is chock-full of the banalities most of us tired of in high school: inter-dynastic jealousies & conspiracies & feuds, homicides & beheadings, retinues & hangers-on & concubines, land-hunger & rebellions & battles. The tale as it’s told hasn’t advanced much beyond “Edward was a good king & happiness reigned in the kingdom but his son Richard was an evil lad & blood rolled in the streets.”

Shakespeare, Vergil, & Thomas More portrayed Ricky in the most unflattering terms but regrettably focused on his scoliosis to dramatize him as a malignant & machiavellian character who clawed & murdered his way to power–including murdering two small nephews so he could take their place as king. He also has historical defenders but the youngest was born over 300 years after Ricky croaked & their best efforts are more damning than defense. Alfred Legge in “The Unpopular King” (1885) claimed Richard’s noble spirit was warped by the ingratitude of others. We’ve all sustained ingratitude in life but most of us don’t go psycho & kill our relatives. The 20th century medievalist, Charles Ross, eschewed moral judgement saying 15th century England was a ruthless & violent age among the upper classes & Ricky’s villainies are excusable since they were “conditioned by the standards of his age.” We don’t live in such swell times ourselves so next time you want to pull a double-homicide pull that alibi out & see if it’ll fly in a court of law.

Ricky’s not looking so good after all this time under the parking lot but even over 500 years later you can see Ricky & Betty share the same snarl. That’s how they really knew this was Betty’s ancestor. That & the smell of his bones.

The only question remains: where was Robin Hood in all this?

(Photo from University of Leicester)